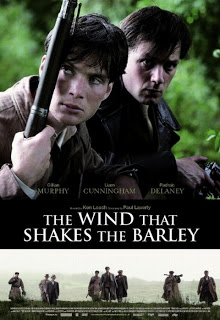 Since it’s St. Patrick’s Day and I’m partly of Irish heritage, I thought I would check out this film about the Irish war of independence and the start of the Irish civil war.

At the focus of the film is the Irish Republican Army. At first thought, I thought this was the same IRA that would later do terrorist attacks in Northern Ireland. However, after a quick look at Wikipedia, I found out that this was the first of six groups to be called the IRA.

I don’t want this to be a history lesson, so I will just say I thought this movie was very good. Especially worth noting, was the performance by Cillian Murphy, who over the course of the film went from being reluctant to join the IRA’s cause to defending it at all costs. Personally, I found the character change haunting (especially since the opposite somewhat happens to his character’s brother).

In the end I definitely enjoyed this film and I would definitely say it’s worth checking out.