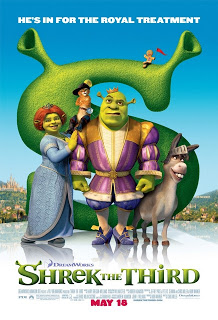 This his is the second of the three big “threequels” this month.

So, what do I think about the third film of this popular animated series.

First, I think it’s great of kids. As for adults like me, it’s alright. It definitely has a much more simple story than the past two films and there really aren’t any “epic” moments like the other films had. In fact, the ending can be labelled as slightly anticlimactic (though the same can also be said for the ending of the first film).

I would say that the second film was the best film. Second best would be the first film, though I would say this film doesn’t fall too far behind.

So, Shrek the Third is not the best of the series, but I would say that it’s worth seeing.