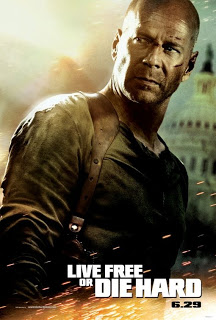 I had to do a lot of preparation before going to see this, the forth movie in the Die Hard series. Specifically, I had to see the other three movies.

I purchased the box set on Monday and watched the films throughout the week, so I would be all caught up on the adventures of John McClaine for this weekend.

I have to say that I quite enjoyed this movie. It was a very fun and over the top action movie and it’s definitely worth to carry the Die Hard name.

However, I would think that there are some purists, who will argue that point. The movie was edited down to be released with a PG-13 rating in the U.S.

The previous films are know for their excessive language and violence and I think some of the hardcore fans believe that the series is being “neutered” somewhat in trying to reach a younger audience.

What I have to say about that is while the language is noticeably toned down, the only real thing missing from the violence is extreme bloodshed. It is still very action-packed and still worth seeing (and the purists can just buy the unrated DVD that will almost for sure be coming out)