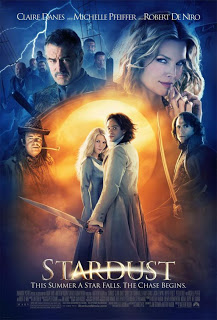 This is one of the few weekends, which I went to see two movies. One of them I liked better than the other. Here’s my thoughts:

Stardust
I had gained enough interest in this film, that I decided to go see it yesterday, in addition to my original plans of seeing Rush Hour 3 today.

I quite enjoyed this film. I thought it had a similar feel to the classic fantasy film The Princess Bride. Even though Rush Hour seems more of the popular choice of the films released this weekend, this was the more satisfying. Rush Hour 3
So, let’s talk about Rush Hour 3. Well, I did not think it was a bad movie and I did laugh quite a bit. However, it seems more like something I would prefer watching on TBS (which has been playing quite a few Jackie Chan films in the last few weeks) than paying to see it in a theatre.

The plot of the Rush Hour films are also a bit formulaic, in the fact that it’s essentially the same story in different cities.

Another observation is that Jackie Chan is clearly not the man he used to be. As he gets older, he has started doing less intense stunts and the martial arts factor was clearly lacking in this film.