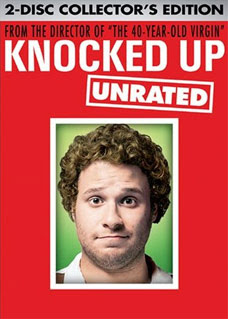 It’s a few days late, but I thought I would give my thoughts on the 2-disc unrated version of the Knocked Up.

First, I’ll talk about the “Unrated” label. From what I noticed, while there are new scenes in the film, I don’t think they really justify advertising the film as “Unrated.” I think this version of the film would have got away fine with an R rating. There is actually more unrated stuff in the deleted scenes than the movie itself.

Now for the Special Features. There are a lot of them on this 2 disc set. So many, that I did not have time to watch them all. Both discs have their own sets of Deleted/Extended scenes, so you can probably edit your own “Super Cut” if you see fit. Some other interesting features, include a feature on a cast member, who dropped out just before shooting, line-o-ramas, and a funny feature on the other people, who were “cast” in the lead role before Seth Rogen.

Other than the slightly misleading unrated label, I thought this was a good enough DVD for this hilarious film.