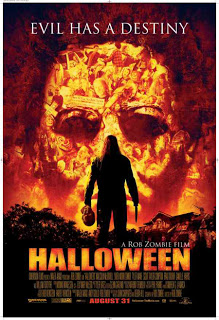 Back in April, I pondered how Rob Zombie’s remake/reimagining/whatever of Halloween would measure up to John Carpenter’s original film.

My final verdict is not that well.

I have to say, when I was watching the film, I was intrigued by the expanded backstory that Zombie gave Michael Myers. In fact, I thought it was quite good. I even have to say that the reinterpretation of Myers’ first kill(s) is best remade scene in the movie.

The problem, as it turned out, was that the film focused too much on Michael Myers and when the story switched from prequel to remake, my opinion on the film pretty much went 180.

In the original film, you have about 10 minutes of introductory scenes before you are introduced to the true main character, Laurie Strode. However, in this film, the story is half over before Laurie Strode makes an appearance. In addition, the film barely introduces Laurie and her friends, Annie and Lynda, before Myers shows up and starts slicing and dicing.

That is a huge contrast to the original film, where the bulk of the film consisted of Myers merely being a shape in the shadows (hence the nickname “The Shape”), with the bulk of the murders not happening until the last half hour or so.

In the end, I think that this remake will probably make me enjoy the first film more, since it’s not filled with the overwhelming desire to sympathise with the villain.

And I can say that I’m fine with that.