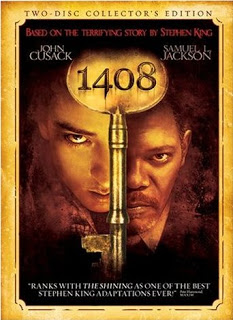 ere is my second DVD review. This review should be much more thought out than the, slightly rushed, review for the Knocked Up DVD last week.

1408 was a film that I really enjoyed during the summer and I was glad to pick up the two-disc DVD. However, I had a small pet peeve about this DVD set before I even went to the store to purchase it. You see, this set contains two editions of the movie: the theatrical cut and an extended director’s cut (glad to see an extended version of a horror film not labelled “unrated”).

The only redeeming quality of this format is that the discs are labelled as “Widescreen” and “Director’s Cut” instead of “Disc One” and “Disc Two” (though they are labelled as such on the back of the box). The five “Dolphin Hotel” postcards inside the DVD case is worth putting up with this pet peeve as well.

The majority of the review will be based on the “Director’s Cut” disc. However, it would be unfair to leave the first disc out, so I will give that a quick look now.

The first disc is what you would get if you decided to save money and purchase the single disc edition of the film. It’s a fairly bareboned disc with the film, two “webisodes,” and the trailer.

Since, I will be looking at the “director’s cut” in a minute, I’ll skip the feature and go straight to the webisodes. The webisodes are just brief two-minute clips that feature interview snippets interspersed with scenes from the film. As the name implies, these clips were probably made to promote the film on the internet and they don’t really go far in terms of being a special feature on the DVD (the film trailers at the start of the DVD are longer than these).

So, now we shall change discs and go onto the “Director’s Cut” of the film.

With the exception of a few new scenes here and there, most of the film is not all that different than the theatrical cut. The big difference in the film comes with the new alternate ending, which is pretty much a complete 180 from what’s in the theatrical cut. Without giving anything away, I will say that it’s definitely the less “Hollywood” of the endings and that it also gives Samuel L. Jackson a bit more screen time.

The special features on this disc include the director’s commentary, about 11 minutes of deleted scenes, and four behind the scenes featurettes. It’s not much, but it’s definitely more than first disc.

My final thoughts on this DVD set is that isn’t really worth being a two-disc set. While I may like to watch the original version for the theatrical ending, it may have been better (and cheaper) to have got the director’s cut in a separate single-disc edition. However, once again, I do really like those postcards.