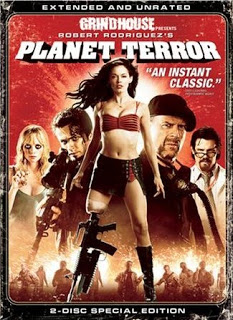 I found it sad how it was decided to separate Grindhouse into two separate DVD releases. I even skipped last month’s release of Death Proof in release believing that I would just wait it out for the release of the theatrical experience.

However, with this week’s DVD release of Planet Terror, I decided that, in the end, it would be easier to have each film separately, which would make for easier viewing experiences. So, I went out to buy Planet Terror and I also picked out Death Proof. As such, here is a joint review of the DVDs.

Both of the films are extended from the theatrical version. There is nothing noticeably different in Planet Terror. I believe there were some new scenes and additional gore, but nothing too spectacular. It even keeps the “missing reel” from the theatrical releases. The changes are more apparent in Death Proof with new scenes and partial restoration of the missing reel (i.e. the infamous “lap dance” scene). I should also point out that even though the films have been separated, Planet Terror still says “Grindhouse” during the opening credits.

Now for the special features. First, it should be noted that the Planet Terror disc retains the Machete trailer, which make the disc a little closer to the theatrical experience than Death Proof, which just goes straight to the feature (though it did feature the old-fashioned “Feature Presentation” screen).

The second disc for each film contains about 5-6 ten minute featurettes that cover various aspects of the films. I was actually surprised at the amount of special features for films that originally joined as one. My favourite was Robert Rodriquez’s “10-Minute Film School,” where he goes through how some of the sequences were filmed (and reveals that there WILL be a future DVD for the theatrical version of Grindhouse).

Overall the separate Grindhouse DVDs are good enough release for a film that was originally shown as a double-feature. The only thing I’m really upset about in how the trailers, other than Machete, are missing from the release. Perhaps they would be on that double-dip release (I’ll probably talk about double dipping another day).