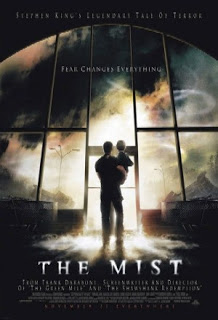 The Mist had two stigmas to content with. First, people can easily confuse the title with John Carpenter’s The Fog (and specifically the 2005 remake, which didn’t do so well). Second, it’s Frank Darabont’s third adaptation of the Stephen King story after successfully adapting The Shawshank Redemption and The Green Mile.

My verdict on this this film is that while it is not as flawless as Darabont’s other adaptations, I still found it an enjoyable movie.

As with most survival-horror stories, the film was less about the threat and more about the people trying to survive. I believe that Marcia Gay Harden was appropriately dislikeable as a religious fanatic preaching fire and brimstone, which really contrasts with Thomas Jane’s straight-headed problem solver.

Before seeing this film, I read that there were some issues with the ending, which is extended from where Stephen King let off in the novella. Personally, I didn’t mind the ending. Even though it wasn’t necessarily required, it didn’t really change the tone of King’s ending too much.

Despite a few flaws, I really enjoyed this film and even though it’s not great like Shawshank, I still thought it was quite good.