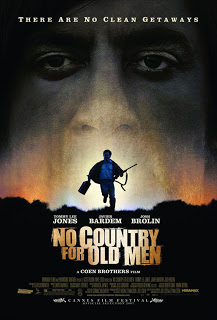 During their career, the Coen brothers went back and forth between dark dramas and comedies.

During the 11 1/2 years since the release of Fargo, they really leaned onto the latter with only 2001’s The Man Who Wasn’t There being the only real non-comedy released during that time.

As such, you can call No Country for Old Men a bit of a return to form for the Coens. I have to say that I believe that this film is their best film since Fargo.

I found the film actually followed a similar formula to Fargo with Tommy Lee Jones being like Frances McDormand, Josh Brolin being like William H. Macy, and Javier Bardem being similar to Peter Stormare.

Those similarities aside, the films does stand out on it’s own in many ways. Javier Bardem is a great villain, who is very calm about all the violence he is committing. Most of the scenes, with him are quite suspenseful, especially one midway where he is after Josh Brolin.

Josh Brolin has the most screentime in the film, even though he is really secondary to the overall story. The real story of this film, deals with Tommy Lee Jones and how he is dealing with all the death and destruction going on around his.

In the end, I would have to say that No Country for Old Men was the first great film I have seen this fall season, and I know there’s more to come.