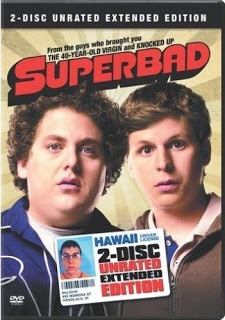 Despite my previous comments, I went out an purchased one final DVD for myself before the holidays and it happens to be one of the funniest films I have seen this year.

I do have to say that the label on the DVD is a little misleading. I compared running times and the “unrated” version of Superbad is a grand total of four minutes longer than the theatrical cut and you really have to do a scene-by-scene analysis to really know what’s different.

The true meat of the set is with the special features on the second disc. While not in-depth as, the previous Judd Apatow DVD, Knocked Up, there is still a good amount of features.

Like I said, this DVD set is not as jammed pack as Knocked Up, but it still good. However, in the future I hope they stop using the “unrated” label as a marketing ploy and add something to the film that makes it earn that title (even if it means sacrificing the “deleted scenes” feature).