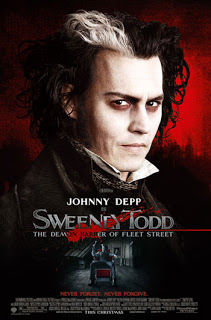 It is even more dark than Sleepy Hollow, which was released eight years ago (and featured over a dozen decapitations).

I would also say that this is probably Tim Burton’s best film so far. He has moved a long way in the 22 years he has been making films.

You could probably say at this point that Johnny Depp is a like-long collaborator for Burton, with this being his sixth Burton film.

I won’t say much more other than that this film will definitely be high up on my favourites for the year.