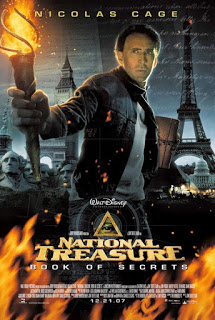 Back in my December movies of the moment column, I listed Walk Hard, Aliens vs Predator: Requiem, and this film as films that I was unlikely to all see. While it’s true that I never managed to see them all in December, it is now January and here I am with the final of those three.

The missed the first National Treasure in theatres and only saw it much chance on an aeroplane. However, I like what I saw and I decided to check out the sequel in theatres.

Being a Disney film, this is an action/adventure film that is fun for the whole family and it doesn’t really try to be anything other than that.

It’s not a cinematic masterpiece, but it was a fun film that I quite enjoyed.