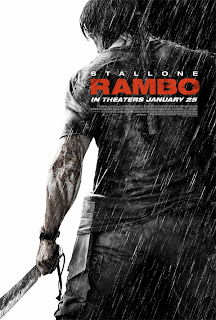 I never saw any of the previous First Blood/Rambo films, but it know well of their reputation of being synonymous with action films.

I would say the forth film, with follows the similarly eponymous Rocky Balboa, lives up to the series’ hardcore action reputation.

Sylvester Stallone does not hold back with the action scenes and they were definitely the best parts of the film.

However, I have to say that I thoughts that the story of the film seemed a little bit too formulaic and came off thinking most of the plot was just used as a bridge between the action sequences.

The film was not bad, but it definitely not the best either.