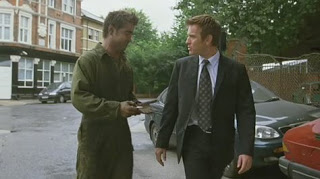 Here is a new column, where I will periodically provide my thoughts on a selection of the latest movie trailers. I will included embedded YouTube videos for quick viewing, with an additional link to the quicktime page, for a higher quality download.

This is trailer for the new Woody Allen film staring Colin Farrell and Ewan McGregor. This thriller seems to similar to Match Point in the fact that you wouldn’t know it was a Woody Allen film, unless you were told so. As such, it would definitely be work checking out.

The first thing I noticed about this trailer for the remake of the 1980 slasher film is the PG-13 rating. Now, I am not one of the gore purists that’s all-out against PG-13 rated horror films, however I think a slasher film can’t really be done right without at least some violence. It seems that horror films this days is more about the marketing than the chills.

You Don’t Mess with the Zohan

Adam Sandler has been slumping a bit with his films lately and the last film of his I truly liked was 2004’s 50 First Dates. However, this film, where he plays a former Mossad agent trying to be a hairstylist looks pretty funny.

That’s all for now. I’ll return with more trailer thoughts in a few weeks.