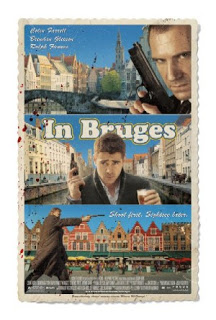 This month features many independent films that I’d like to see, so what better way to start than the film that opened this year’s Sundance Film Festival.

This film is a darkly humorous tale about two hitmen (played by Colin Farrel and Brendan Gleeson) hiding out in one of the worst places on earth (according to Farrel’s character) — Bruges, Belgium.

There is one point in the film, where Farrel’s character compares Bruges to hell or purgatory, and he’s probably not that far off.

His character of Ray is at a crossroads in his life and Bruges is the place, where he would decide what path he should follow.

It would also be an understatement to say that Ray is a very politically incorrect character and some of the things that he says could offend some people.

In the the end I found In Bruges an entertaining film, in terms of politically incorrect heist films (plus it was neat seeing Collin Farrel use his real accent).