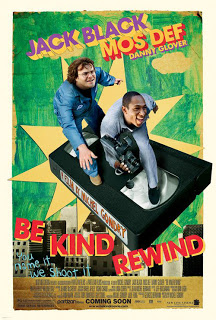 I first heard of this film in May 2006 and I thought it’s premise of making homemade remakes to popular films sounded good on paper. Also, it was directed by Michel Gondry, who always brings a unique vision to his films and music videos (Eternal Sunshine of the Spotless Mind being one of my favourites).

However, when it came to actually executing this premise, the result was only OK. I liked the first, very detailed, parody of Ghostbusters and I liked the quirky subplot where Jack Black’s character becomes magnitized (which is pretty much retconned after it meets its purpose). However, later remakes are only shown in brief clips (though apparently they can be seen on the film’s website) and the plot mostly deals with fighting to keep the video store open.

It was a fair film, but I have come to expect something a bit different from Michel Gondry (in fact, I wouldn’t have minded if the entire film was about Jack Black’s magnetism)