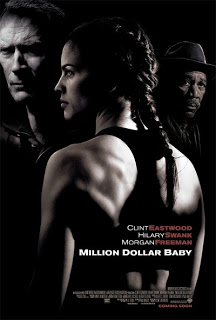 Million Dollar Baby will probably always be infamous for being the fifth film that Martin Scorsese lost to, before he finally won his Oscar last year.

I do agree that this is a very good film, but I feel that this film winning was almost consolation for the fact that, in my opinion the better film, Mystic River was creamed by the behemoth that was The Lord of the Rings: Return of the King the year previous.

This film was also notable for the controversy it generated over it’s ending. I commented on this controversy at the time, and you can revisit those comments here (a follow-up can also be seen here).

In the end, even if Million Dollar Baby did recieve a consolation Oscar, it was still a might fine film and deserved all the achievement it recieved.

My schedule for the week will make a small change. The second Best Picture revist, Crash, will be tomorrow instead of Friday, on Friday I will talk about The Departed and I will talk about Oscar hosts on Saturday.