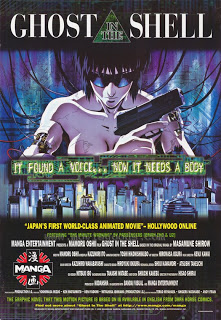 My first film in my look back at classic films is the anime cult classic Ghost in the Shell.

I just saw this film for the first time yesterday and one thing that stuck out for me is that I never really noticed that it was animated.

This may have been because of the adult-oriented sci-fi plot, rather than than the child-oriented fantasies in most of the anime I’ve seen.

In the end I never really though of Ghost in the Shell as a good animated film, but a good film in general.