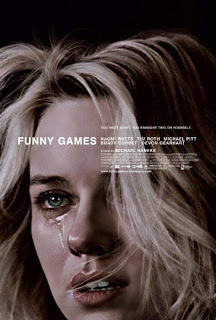 Funny Games is not an entertaining film. I thought that I will make that clear. However, I will also say that I thought it was a very good film.

It’s a horror film and it’s a shot-for-shot remake of an Austrian film of the same name by the same director.

It’s a highly disturbing film. The majority of the violence is off-screen, however the sounds are enough to make you cringe.

Despite its disturbing nature, I do believe the main goal of the film is to play with the viewer’s expectations. The film seems to be aware of horror movie conventions and the main villain even breaks the forth wall on many occasions to address the audience.

It’s this reflexivity that made Funny Games a compelling film. However, it is definitely not something that you should watch casually on a Saturday afternoon.