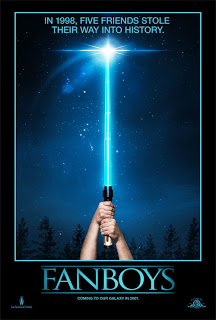 Fanboys has been a project that his been in the making for a few years now (I saw a trailer I don’t know how long ago).

It was reported this week this week that two versions of the film are going to be released. This is apparently the result of backlash over a recut version of the film that removes references to one of the characters having cancer.

Of course, having two versions of the film isn’t enough and fans are enough encouraged to boycott the Weinstein Co, starting with this weekend’s Superhero Movie, until the original version is restored.

In slightly related news, AICN has an post that links to a blog detailing the many people that were cast as AICN’s Harry Knowles in the film. Quite interesting.

And that’s my Interesting Film News of the Week!