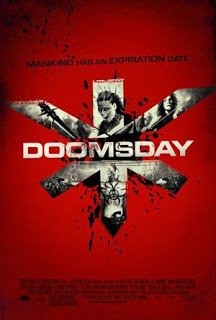 I’ve probably said this a million times by now, but Doomsday is what you get when you take films such as 28 Days Later, The Road Warrior, The Warriors, and Escape from New York and combine them with a dash of Excalibur.

So yeah, the film is not that original and that is probably its biggest flaw. Some of flaws include the fact that the film is sometimes violent for violence sake (a shot of a rabbit exploding after being shot with turret gun comes to mind) and that there is an interesting, yet unnecessary, deviation in the plot, which is only there because it features a character important to the story.

I read that this film was meant as a homage to the types of films I mentioned above. Whether it strays into rip-off is probably a matter of opinion. I do say that I was entertained enough to give the film mild praise, but I think I’m more likely to rewatch The Road Warrior than see this film again any time soon.