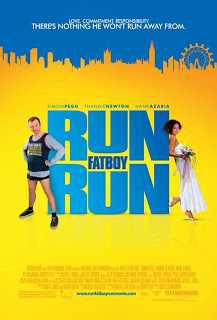 It’s the final weekend of March and there’s an interesting collection of films coming out.

My pick for the weekend will be the romantic comedy Run Fatboy Run. It is the directorial debut for David Schwimmer and it stars Simon Pegg, Thandie Newton, and Hank Azaria. The plot involves a loser, who enters a marathon to win back the girl he left at the alter.

The second major film opening this week is 21 staring Kevin Spacey, Jim Sturgess, and Kate Bosworth. The film’s about about six MIT students, who use card counting to win in Las Vegas casinos.

Rounding out this weekend is the Iraq war drama Stop-Loss and the parody film Superhero Movie.