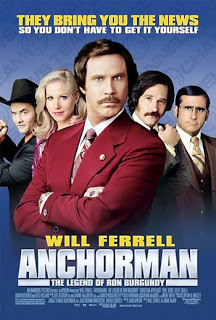 With this month’s release of Forgetting Sarah Marshall, I thought I would take a look back at the film that started Judd Apatow’s “reign of terror.”

Anchorman is arguably the best of Will Ferrell’s staring roles, especially when you consider that the character of traits of the character of Ron Burgandy were repeated in subsequent Ferrell films.

The film boasts an excellent supporting cast, the most notable of which being a pre-Office Steve Carell. The film also features more uncredited cameos than you count. This includes the likes of Vince Vaughn, Tim Robbins, and Jack Black. If you have a sharp eye, you can even catch a young Seth Rogen as a cameraman.

Like it or not, Anchorman paved the way for the like of The 40 Year Old Virgin, Talladega Nights, and Knocked Up with more films on the way.