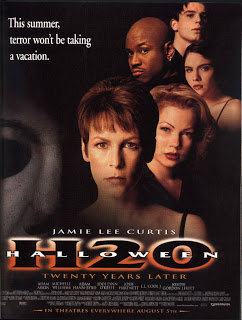 So last night I was looking through the list of movies on my OnDemand service and I noticed that they added Halloween H20 to the list. Since I’ve only seen two films in the series (the original and last year’s remake), I decided to check it out.

You know, as many problems I’ve had with Rob Zombie’s remake last year, I could at least say that it was a chance to breathe new life into the series. I could tell from watching Halloween H20 that the quality of the series had gone down since the original film.

This film tries to follow the format of the original by developing the characters and saving any killings until near the end. However, Michael Myers’ presence in this film isn’t nearly as creepy as it was in the first film and you are almost waiting for him to do something.

This film was the first Halloween film with Jamie Lee Curtis since Halloween 2 (which I still want to see). She was pretty much the anchor of this film with none of the characters being too interesting (though I did like seeing a young Josh Harnett in his first role). I can’t help that think that this film was just a cash-in as part of the slasher boom of the late-90s and not a true celebration of the Halloween series.

It has already been nearly ten years since this film came out and the Halloween series is getting ready for its 30th anniversary. I wonder if they are going to do anything for that (I guess I have to wait until October).