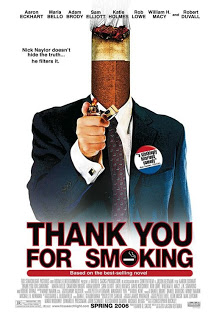 It wasn’t until after seeing Juno that I decided to give Jasan Reitman’s first film a shot. I had skipped the film when it came out two years ago because I’m very anti-smoking and thought that it would be hard to sympathize with a character, whose goal was to shamelessly promote the habit.

When I finally purchased and saw the film, I saw that the film was a satire of both sides of the anti-smoking argument. The film is neither for or against smoking and the film displays both likable and unlikable on each side.

Another notable fact about this film is that even though Arron Eckhart ‘s character is supposed to be promoting smoking, not a single person is seen smoking in the entire film. That fact alone makes the film an interesting ironic satire.