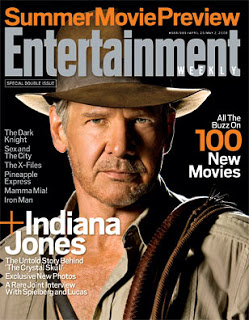 It can be hard finding that one news story for my Thursday column (the fact that is my first such column in two weeks is proof). However, this week’s column just dropped in my lap yesterday.

I was browsing FirstShowing.net and I noticed an article critiquing the summer box office predictions made in the current Entertainment Weekly.

For your information here are what the predictions said:

Now I would have agree with criticisms that are laid out in the FirstShowing article. If read the reasons for each the predictions (seen in a scan from the magazine), you would see that the “predictions” are nothing more than educated guesses. If a film’s a sequel, they take the previous film’s gross and slightly raise or lower it based on the film’s hype. Similar adjustments are made based on the type of film (such as animated), the star of the film (Will Smith in Hancock), and the type of weekend (Hancock opening Independence Day).

I agree with FirstShowing that The Dark Knight is more likely to be one of the top three films rather than being 6th in the Box Office. I also agree that it would probably be in direct competition with Indiana Jones for the top spot.

It will be interesting watching the Box Office tallies over the next four months to see if any of these predictions were even close.

And that’s my interesting news of the week!