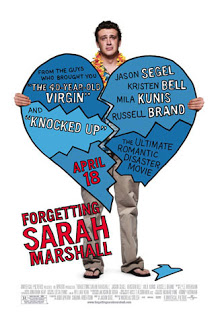 This film comes about a little under 11 months after my only other experience with star Jason Segel (that being Knocked Up). He wasn’t really too much of a stand-out in the movie, so it was a little risky pushing him into the lead (even though that move worked for Seth Rogen in last year’s film).

I thought that the film wasn’t bad, but it also wasn’t the best film released by Judd Apatow. The film was more about funny moments than being constantly funny. I also can’t help but compare this film to The Heartbreak Kid, because of the similar beach-side setting. While this film did a better job of mixing crude humour in a romantic comedy, it is still not the funniest film I’ve seen this year (that would be Run Fatboy Run).

Before the film, they played the trailer for Pineapple Express. Now THAT is a film I am expected to be very funny, but this film will do for now.