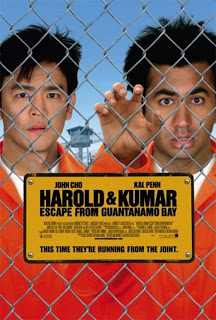 The sequel is once again a racially charged stoner comedy. However, this time, instead of the simple goal of trying to locate a burger joint, the politically themes are turned way up and Harold and Kumar find themselves on the run from the government.

The sequel is not bad, in fact it’s just under par with the first film. However, while racial profiling was a factor with the first film, it just went overboard with this film with nearly every character being subject to stereotypes (most by the ultra-racist government agent). It’s more cringe worthy than funny, but thankfully there are plenty of non-racial jokes in this film to keep things afloat.