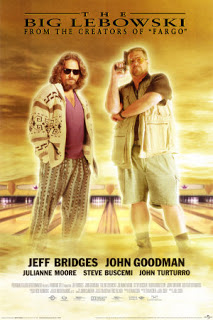 It was just in March of this year when this film, which is arguably the Coen Brothers’ biggest cult film, celebrated its tenth anniversary.

I myself just recently picked up this film on DVD. While, I was not too sure about this film on the first viewing, it started to grow on me during repeat viewings.

The film was the Coens’ follow-up to Fargo and it was definitely lighter fare than that film. In fact, with the exception of 2001’s The Man Who Wasn’t There, this film started a nine year trend of the Coens directing mostly comedies and they only just returned to darker films last year with No Country for Old Men.

This film is all about Jeff Bridges as Jeffrey “The Dude” Lebowski, in which a case of mistaken identity results in a series of misadventures.

The film is at its best when the dude is with his bowling buddies Walter (John Goodman), the loud-mouthed, short-fused Vietman vet, and Donnie (Steve Buscemi), the excellent Bowler that is barely allowed to say two words.

Then, of course there is Sam Elliot narrating the story as “The Stranger.”

The Big Lebowski is probably not my favourite of the Coens’ films, but it is a fun film.