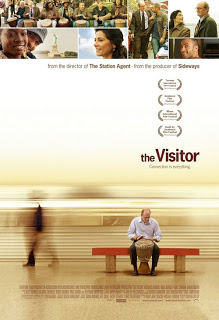 When I go to my semi-regular independent film viewings, I usually never know much about the film I am going to see. I just see what’s playing, watch the trailers, and watch a film that seems intriguing.

That’s how I decided to see The Visitor.

This film has a very low-key cast, with the only real recognizing face being Richard Jenkins from Six Feet Under. That made it a bit easier to get immersed in the story, which involves a college professor, who strikes up a friendship with a Syrian drummer, who ends up being detained by immigration.

The film makes you question the immigration policies within the United States without really dwelling on the subject. The real story of the film is how Jenkins’ character is changed by his encounters with these immigrants and how his life may be better for it.