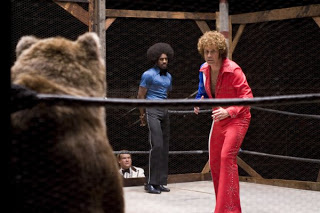 According to IMDB, Will Ferrell is being urged by PETA to stop working with animals in his movies after the bear he wrestled in Semi-Pro attacked and killed its trainer in California last week.

PETA goes on to argue that performing animals are often treated badly by their trainer and that the “want to be movie stars about as much as they want to be stuck in a cage for the rest of their lives.”

This can be looked at two ways. On one hand PETA is using a tragic event to help in their campaign of stopping animals from appearing in films. On the other hand, the bear might have truly been treated badly and PETA would have every right to complain.

In my view, PETA can be a bit radical at times and while I agree with some of the things they campaign against (such as the fur trade), there is some things that I can’t entirely agree with. This would be one of those things. I find it would be hypocritical for PETA to argue that animals are frequently beaten to perform and then their a message from the Humane Society saying that “No animals were harmed in the making of this film.”

There are probably good trainers, as well as bad ones. In terms of bears, Bart the Bear appeared in films for nearly 20 years and was apparently very well taken care of.

However, this is a bit of touchy subject, so I’ll just leave it at that.

And that’s the interesting news of the week.