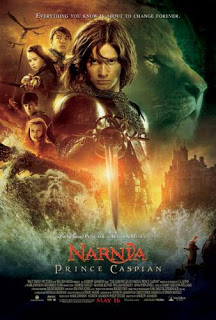 Last Wednesday when I looked back at The Lion, The Witch, and The Wardrobe, I worried that I did not know if I would enjoy this film, since I wasn’t that familiar with the rest of The Chronicles of Narnia.

However, it turned out that I enjoyed the film just fine.

It helped that this film is more darker and action-packed than the last film. However, even though there are more battles than the last film, there is still the fantasy elements with talking animals and mythical creatures.

In the end, I can say that I probably enjoyed this film better than the last, and I will be looking forward to the third film, which is scheduled to come out in 2010.