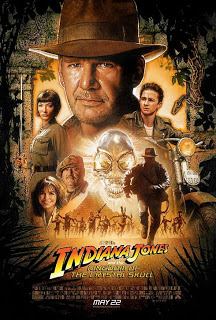 It’s a day late, but here’s my thoughts on the new Indiana Jones film, which I saw last night.

I should probably start off by saying that it is not a perfect Indiana Jones film. In fact, I would probably rank it third in the series (after Last Crusade and Raiders of the Lost Ark).

However, it wasn’t a bad movie either. Without saying too much, this film takes on a bit more of a sci-fi turn (as opposed to biblical). As a fan of that genre, I could say that was okay with me.

If I do say one thing, the film does wrap up the series nicely (though it does keep things open for that rumoured Shia LeBeouf-centered fifth film I talked about last week).

Overall, I found the film entertaining and even though I still consider Last Crusade my favourite in the series, this one was still a fun ride.