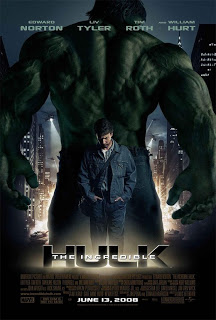 The Hulk definitely smashed the box office this weekend, but not as high as another Marvel superhero.

Here are the estimates:

The Incredible Hulk opened with a decent sum of $54.5M. However, that number is just over half the amount Iron Man made when it opened last month. That film, by the way, is poised to become the first film of the year to pass the $300M mark, as it’s total currently stands at $297M.

The other new release of the week, M Night Shyamalan’s The Happening, opened in third place with $30.5M. While it is not as good an opening weekend of some of Shyamalan’s other films, it was definitely an improvement over the $18M Lady in the Water made on its opening weekend. In addition, it’s also a pretty decent number considering the film was opening up against The Incredible Hulk.

Last week’s number one release Kung-Fu Panda dropped down to second place with a gross of $34.3M, bringing its total to $118M.