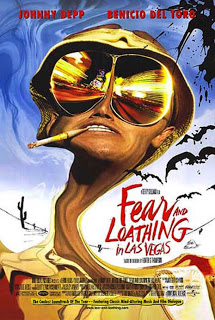 I was never that familiar with the works of Hunter S. Thompson before I saw this film, which is based on the semi-autobiographical book of the same name.

The easiest way for me to describe this film was that it was just one giant drug trip. There is some weird stuff an early in the film, such as Johnny Depp’s character hallucinating that an entire room has turned into dinosaurs.

Gladly the rest of the film was a little less weird, however it was sometimes hard to grasp what was going on in the film.

In the end it was an alright film. I think I have to watch it a few more times to understand it, but it did have it’s moments. I also liked how the film was shot to look like it was filmed in the 70s (which is when the film takes place).