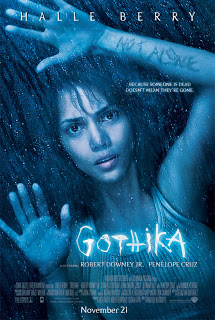 This week’s classic thoughts is a “tale from the bargain bin” as I just picked up this film for only $4.

Gothika is a product of Joel Silver’s and Robert Zemeckis’ Dark Castle production company, which was originally formed to create remakes of William Castle horror films and it eventually removed to original films (and according to its current production schedule, it’s expanding away from just horror films into general genre films).

Gothika can be compared to last year’s Dark Castle release The Reaping, in which it features an Oscar-winning actress in the lead role. In fact, this film probably has the best cast of all the Dark Castle productions, with Robert Downey Jr. and Penelope Cruz also present.

As for the film itself, it was just okay. The film almost lost me for a bit in the second act, however it redeemed itself a bit in the climax. Also, the film is one of those “stylized” horror films (not uncommon in Dark Castle productions) with a lot of fast cuts and “stobe-like” lighting, which not really my preference with these types of films.

In the end, Gothika was definitely not the best film to be produced by Dark Castle, but still has its moments (especially towards the end) and it was probably at least worth the $4 I spent on it.