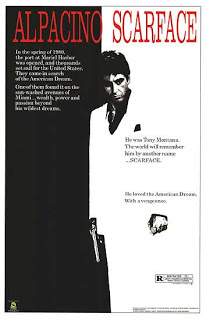 For a film that is on so many “must-see” lists, it is odd that I have never seen Scarface until just last week. Then again, there are many classic films that I haven’t seen.

The film may be considered a classic now, but when it came out it was controversial for the amount of violence and profanity in the film. The most controversial scene was a scene where a guy was killed with a chainsaw. While, the scene seems awfully violent, in actuality it is just using the “less is more” approach by making you think you are seeing more than you actually are.

For the film itself, I found that it started out a little slow for me, but it got better as it went along. I was a bit naive not to notice on the DVD box that the film is nearly three hours long, so the fatiguing, yet rewarding experience.

For those who don’t know, the film is about a Cuban immigrant, who rises to become a drug load and just as quickly falls. The three hours of the film neatly divides the film into three acts and you can see how the character of Tony Montana changes in those acts.

In the end, Scarface was an effective film and it is deserving of its place as one of the modern classics.