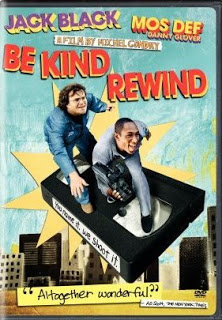 This week sees the release of Michel Gondry’s Be Kind Rewind. As I had stated before, the film’s premise of two guys making cheap remakes of films sounded good on paper, but it only had one good execution (the Ghostbusters remake), while the rest were just shown in montage. However, it is still a decent film.

Also coming out this week is the treasure-hunting film Fool’s Gold with Matthew McConaughey and Kate Hudson.

Fans of classic Disney films with probably enjoy the new 45th anniversary DVD release of The Sword and the Stone (one of my personal favourites).

The week’s new Blu-Ray releases include Men in Black and the classic Mike Myers comedy So I Married an Axe Murderer.