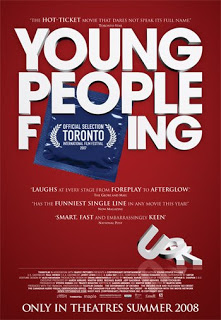 This Canadian film was, obviously, the stand out film at last year’s Toronto Film Festival, in which it sold out in record time. As such, despite its profane title, I decided that I had to see the film to see what all the fuss was about.

The film is a sex comedy with a very simple execution: It takes five couples from different categories (friends, couple, exes, first date, and roommates) and follows them in the process of a sexual encounter in six chapters from the prelude to afterglow.

This film probably features a more honest portrayal of sexuality than what is shown in Hollywood films, especially when the characters enter very awkward situations (some of which were quite funny).

In the end, I can saying that film was a very interesting, and often hilarious, exploration of sexuality among 20-somethings. However, I do have to say that I was a bit disappointed when the line that was advertised as the “Funniest Single Line” of the year only made me result in a slight giggle.