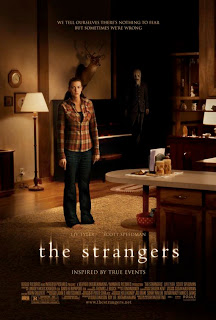 Since I was away during the weekend, I quickly went to go see this film today.

I would have to say that was definitely a very suspenseful film. It was also chilling that this is more realistic film (probably to support its, slightly exaggerated, tag that the film was “inspired by true events”).

I also sense some inspiration from the original Halloween in how “The Strangers” are always hiding in the shadows.

It was definitely a memorable film.