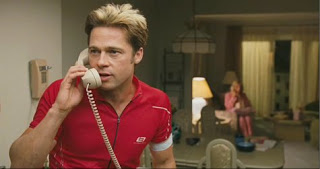 I was not going to post a trailer thoughts column this week, but then I saw this trailer, for the latest film by the Coen Brothers, and I decided that I just had to talk about it. I should note before you watch, that this is a red band trailer (though I didn’t notice much other than some brief language and violence).

Well, let’s get on to the trailer.

After the Oscar-winning darkness that was No Country for Old Men the Coens have returned to comedy, albeit a dark comedy. In this film, Brad Pit plays a fitness trailer that finds a CD containing CIA documents and blackmails the agent (played by John Malcovich). The film also stars George Clooney, Francis McDormand and Tilda Swinton.

From the looks for the trailer, this is going to be one funny movie. It looks the the film could probably be better than The Big Lebowski, which was probably the best of the comedies the Coens directed between Fargo and No Country for Old Men.

I will definitely look forward to this film when it comes out in the fall.