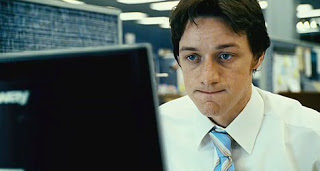 This week I am going to look at the final trailer for the film Wanted, which does a pretty good job at selling this film.

This trailer gives me a better idea of how this film is going to be. Specifically, it was the red band version that really gave me the idea (but it’s a bit too gory to link here).

I can’t help but think that the set-up in this film seems very similar to The Matrix, complete with the protagonist working at an office before being called to be a hero. However, I shouldn’t go too far into the similarities before seeing the film.

Wanted looks to be a fun action film and I will definitely be there when it opens in two weeks.