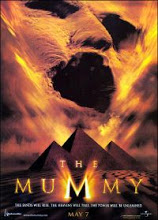 I’ve already done classic thought specials for the Indiana Jones and Batman series, so why not celebrate this week’s release of The Mummy: Tomb of the Dragon Emperor by looking back at the previous Mummy movies and throwing The Scorpion King in for good measure.

The Mummy
The original 1999 film took the basic plot of the 1932 Boris Karloff film and created an adventure film akin to Indiana Jones.

However, this film also retains some of its horror roots, especially during the section of the film when the risen mummy Imhotep is staking the people who disturbed his tomb.

The film probably also helped Brendan Fraser shake the stigma of the goofy comedic roles (in films such as Encino Man, Airheads, and George of the Jungle) that he was known for early in his career.

The Mummy Returns
When the cast returned for a sequel, the series was now fully an action/adventure film, losing most of the horror elements of the first film.

The film was also heavily advertised as the first film role for Dwayne “The Rock” Johnson. However, in the end it seemed like a bit of the a bait and switch, since The Rock only appeared for 5 minutes at the beginning, before appearing at the end as a CGI monster.

Still, it was still an enjoyable ride.

The Scorpion King
This was The Rock’s true debut.

Expanding on the brief storyline given for the character in The Mummy Returns, The Scorpion King is a fairly decent action/adventure film.

It’s not really related to The Mummy series other than the character, and it probably wouldn’t have been worth seeing if it wasn’t for The Rock staring in it.

Still, it was a fair film.

And that’s The Mummy series.