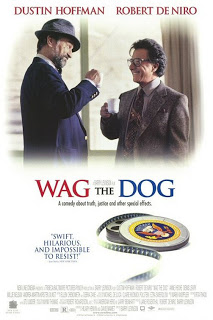 The political satire Wag the Dog came out over ten years ago, however its messages can still be seen as relevant in today’s world.

When the U.S. president becomes involved in a sex scandal days before an election, a spin doctor (Robert De Niro) hires a Hollywood producer (Dustin Hoffman) to create a fake war in order to distract the public until the election.

This film explores, though comically, how media and public opinion can easily be manipulated. With the current year being an election year, you would wonder if any of the candidates would use similar tactics as seen in this film.