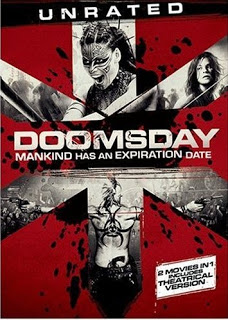 Acknowledging the growing popularity of the format, starting this week I will include Blu-Ray links for all the new film releases instead of just reissues of old films.

Probably the big release this week would be the post-apocalyptic action film Doomsday (also in Blu-Ray). When I saw the film, I stated that while the film was entertaining, it wasn’t really that original and was sometimes violent for violence sake.

Also coming out this week is Harold and Kumar Escape From Guantanamo Bay (also in Blu-Ray). Looking back at my thoughts, I thought that while the film was alright, it wasn’t on par with the first film and I thought that the race card was played WAY too often (for pretty much every single race). This week also sees the release of the original film in Blu-Ray.

This week also sees the release of the Rolling Stones concert film Shine a Light (also in Blu-Ray). I saw the film in IMAX and while thought it was pretty good, if you want a “greatest hits live” type concert, you might be better off picking up a copy of Live at the Max.

Rounding out the week’s new releases is the straight-to-video sequel The Lost Boys: The Tribe (also in Blu-Ray), which is accompanied by the Blu-Ray release of the orginal Lost Boys.

The Jack Ryan films get the High-Def treatment with the Blu-Ray releases of The Hunt for Red October, Patriot Games, Clear and Present Danger, and The Sum of all Fears.

Rounding out the week’s Blu-Ray releases are High-Def versions of Beowulf, Top Gun, and Dark City.