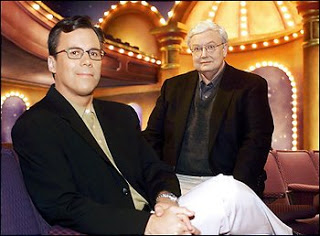 I was saddened to learn today (even though it was first reported Monday) that Roger Ebert and Richard Roeper will no longer be involved with the review show At the Movies.

It was announced that Disney is replacing the duo with Ben Lyons and Ben Mankiewicz and that the show is being reformatted with a more Entertainment Tonight feel.

Roger Ebert hasn’t been able to be on the show since having surgery for Thyroid cancer in 2006, but he had been working behind the scenes. He released a statement saying that would no longer be involved with the show due to the format change and the fact that Richard Roeper left after being unable to agree to a new contract.

The show began on ABC in 1986 as the third review show for the duo of Ebert and the late Gene Siskel, in which the duo popularized the term “two thumbs up.” After Siskel died in 1999, he was replaced shortly thereafter by Roeper.

As for the future of the duo, it is being reported that Roeper wants to move to a review show that “honors the standards established by Gene Siskel and Roger Ebert more than 30 years ago.” The same article reports that Ebert plans to bring back the “thumbs” trademark, which was missing from the ABC show due to a contract dispute last year.

I do hope that this not an end to the movie review format that is almost as famous as the movies themselves. Roeper will remain on the show until mid-August and you can watch the show on ABC or see the reviews streamed on the Ebert and Roeper website.