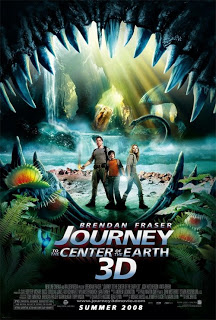 If you recall my Movies of the Moment column for this month, I put this film as one of the films I was not interested in seeing this month.

However, this was because I thought I wasn’t going to be able to see it in 3D. When I found out this was not the case, I decided to check the film out (especially since I have to wait a few days before seeing The Dark Knight).

I can definitely say that 3D is the preferred method of viewing the film. The film is filled with various sight gags and scenes that would definitely seem better in 3D.

However, I also thought that the film was decent in itself. While the film is definitely in PG-rated family film territory, it’s a fairly good story, which is more inspired by the Jules Verne novel than based on it.

In the end, if there is a theatre showing this film in 3D, make sure to check it out (just be warned that you have to pay about $3 more for the 3D show – it probably covers the take-home glasses they give you).