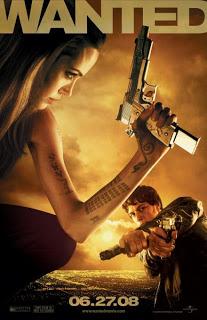 I didn’t really decided to see Wanted until just a few weeks ago and I was really expecting more than what I got.

The first five minutes showed some Marix-like action scenes that made me excited, but with the exception of the climax, it was a fairly standard action film.

I’d say that I probably liked the film enough, but I hope if they make a sequel it would have a bit more ‘umph.”