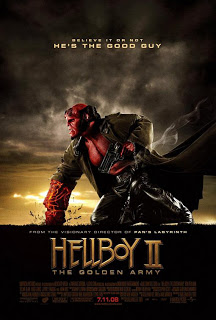 Before I begin, I should say that starting this week, I am going to share the current (as of this writing) Rotten Tomatoes freshness rating for each of the films opening.

This week’s big film this week would be Hellboy II: The Golden Army (87% Fresh). This film is Guillermo del Toro’s follow-up to Pan’s Labyrinth and you would expect the fan del Toro made from that film might check out this one.

Also opening is the new 3D version of Journey to the Centre of the Earth (60% Fresh). This film would be more appealing to me if it was easier to actually see the film in 3D (the closest RealD theatre to me is about a half hour drive).

Finally Eddie Murphy appears in, what is reported to be one of his final movies, Meet Dave (27% Fresh). The film doesn’t look as bad as Norbit, but the reviews are saying the Murphy’s downward spiral is just going deeper.